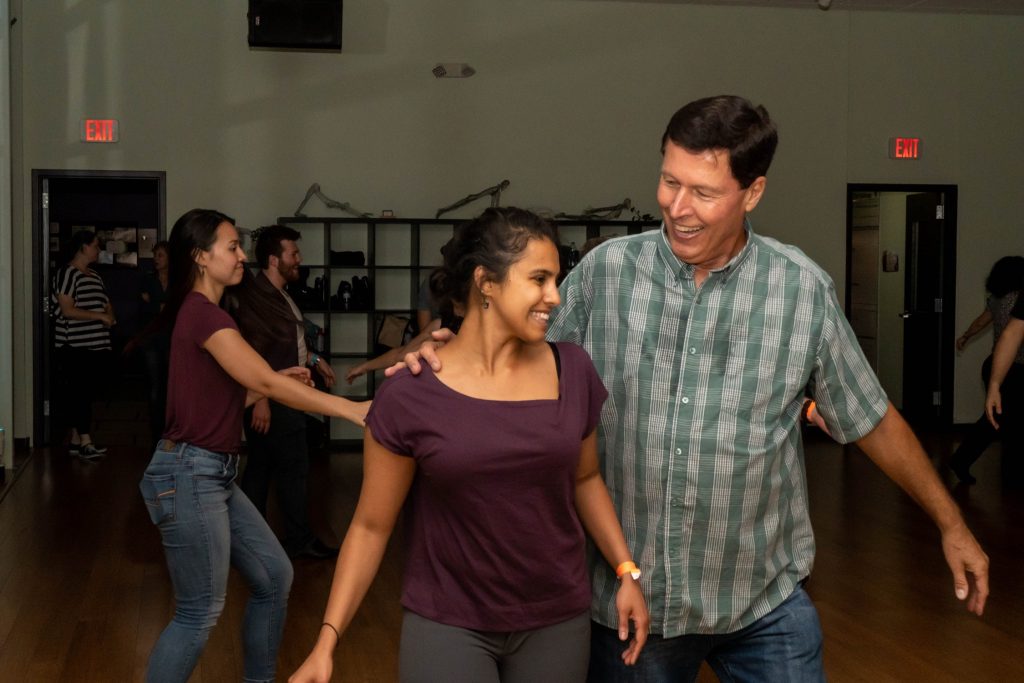 What is the Madison West Coast Swing Club?

The Madison West Coast Swing Club is a social, non-profit organization dedicated to enjoying and promoting West Coast Swing (or WCS) dancing. We started in 1996 with twelve enthusiastic WCS dancers. Since then, our membership has swelled to more than ten times that and is still growing!

What is West Coast Swing?

When does the club dance?

We host weekly and monthly social dances. We also offer lesson series for all levels, from beginners to highly experienced. Drop-in intermediate lessons are offered most Wednesdays before our social dance. Our club also hosts visiting professionals from the West Coast Swing community to teach at the club’s monthly dances. You don’t need to bring a partner to any of our classes or social dances.

No matter your dance level or goals, you’ll find your opportunity to dance at the Madison West Coast Swing Club.

Gary Oien spoke the words first, “We gotta start our own club.”

We all agreed. Gary, Sue, Carla and I were returning to Madison, Wisconsin from a West Coast Swing Workshop and Dance at the Minneapolis Rebels Swing Club given by a visiting professional named Jeannie Tucker. The Rebels’ members were very hospitable and even insisted that the four of us do a spotlight dance (gulp!) in front of a hundred strangers and Jeannie. Their president, Judy, seemed thoroughly delighted that we would drive 4-1/2 hours just to participate at a Rebels event. What none of them knew, and what we knew all too well, was the scarcity of West Coast Swing dancing opportunities in Madison in the fall of 1996. It was frustrating for the dozen of us who had been dancing West Coast for at least a year or two.

But wait, why would we try doing something called West Coast Swing in the first place? Isn’t it the state dance of California? Well, forget about West vs. Midwest. It’s just a great dance! I learned it about six years ago when I lived in Tucson. When I moved to Madison, few people knew what West Coast Swing was. Occasionally one of the local dance instructors would teach a class in West Coast, but it was simply not the wonderfully sexy, funky, and improvisational dance I had seen in Arizona.

In August 1995 at a Chicago dance, we met some other nice folks from Madison, including Sue Pederson and Carla Starks. Eventually I met and danced with a Chicago-based West Coast Swing instructor, Janis Kenyon.

The idea of Janis giving a workshop in Madison was proposed and it happened that fall. The workshop was attended by 24 people, about half of whom caught the West Coast bug and continued dancing wherever there was music and floor space available. That workshop also paired up Michael Collins and Carla Starks Collins for the first time!

After that, our unofficial West Coast group took advantage of any opportunities we could to attend workshops and dances. In February 1996 we took a road trip to Minneapolis for a small, but wonderful, Swing Dance Convention. It included workshops by such West Coast Swing notables as Michael and Mari Kiehm and the effervescent Skippy Blair. That September, we were lucky enough to have Ginni Hustad (of Step-n-Out dance apparel) bring Carrie Lucas to Madison’s Sapphire Studio for workshops. But after the great workshops and road trips, the frustration was always the same: where do we dance?

Finally, after yet another Jeannie Tucker workshop in Minneapolis and after we had seen what a swing club could offer enthusiastic dancers, Gary just stated the obvious. We gotta start our own club. Upon returning to Madison, Gary began the quest to locate a venue for our music and weekly dance instructions. After he found the friendly and supportive manager and DJ (Buzz) at Flashbacks, we knew we had a home. Initially, we told them we expected about 15-20 people each week–then crossed our fingers.

Since then we’ve grown tremendously and West Coast’s popularity is flourishing. Local interest has grown to the point that we can host professional instructors. Great idea Gary!